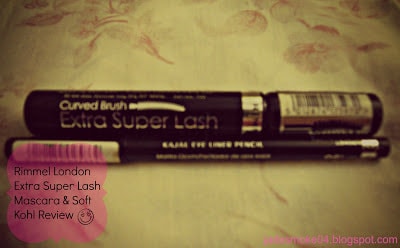 Today I’m posting a quick review of Rimmel London’s Extra Super Lash Mascara and Soft Kohl.
Extra Super Lash Mascara:
I’ve been using Rimmel London’s Extra Super Lash Mascara for a considerable time and I love it! It has a creamy consistency which is good as it doesn’t harden on my eyelashes after drying (unlike some brands) and that way it doesn’t break my lashes after a long day of wearing it. Now we know, Rimmel’s mascaras have a reputation of being clumpy and I won’t say that this doesn’t clump at all, it does a wee bit unlike the claims of super lash separation on it’s tube but that’s okay because I don’t mind slightly clumpy lashes and maybe it’s just me doing something wrong in application :/. Anyways, this is a lash building mascara which gives a very dramatic look and its curved brush (as shown on its cap {see pic}) provides the ease of application and a proper lift to lashes. This product also claims to be suitable for sensitive eyes which is a plus point and I believe it to be true as I’ve never got any eye rashes or anything after using this, though I am not sure if my eyes are sensitive like my skin. 😛

Soft Kohl; Kajal Eye Liner Pencil:
Rimmel London’s kohl pencil is a favourite because it glides on easily on my eyelids though this is not for lining waterline. It is not super pigmented yet build-able, which is a good thing for me because it’s a pain to take off super pigmented make-up at the end of the day. It doesn’t stay on for long though, easily smudges and requires touch up after a couple of hours. 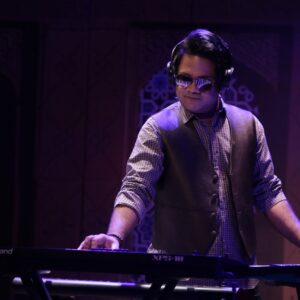 Music is widely regarded as the most ubiquitous of all artistic mediums. Self-expansion, oneness, and reality are all connoted by music. … END_OF_DOCUMENT_TOKEN_TO_BE_REPLACED